Could Lunar New Year Be A Lucky Business Move?
We’ll help you understand the holiday and how your business might participate in it.

Is Lunar New year a good fit for your business? in this article we'll discuss:
What is lunar new year and why does it matter for american-based businesses?
One of the most celebrated festivals in the world, Lunar New Year is all about family reunions, feasting and extensive travel. The celebration begins on the “new moon day” of the first Chinese lunar month in the Chinese calendar system. This means that, like Easter, the date of the celebration moves a bit from year to year. It ends on the first full moon of the lunar calendar, which is fifteen days after the new moon.

Observation of the new year is determined by the lunisolar calendar, and the Chinese aren’t the only ones who observe it. Korea, Vietnam, Singapore and many other Asian countries also celebrate the Lunar New Year as national holidays. The dates of celebration are similar because many countries in Asia use the same lunisolar calendar, with differences being accounted for by geographic location.
Lunar New Year offers great potential for building business relationships, if businesses get it right.
Marketers in the U.S. have only just begun to leverage the Lunar New Year festival as a way to connect with Asian American consumers, despite the fact that, according to the U.S. Census Bureau (as of 2017), there are more than 5 million Chinese Americans in the country and, according to the Pew Research Center, the U.S. Asian population grew 72% between 2000 and 2015 (from 11.9 million to 20.4 million), the fastest growth rate of any major racial or ethnic group.
Tourism is another consumer group to consider. Nearly 3 million Chinese tourists visited the U.S. in 2018, according to the National Travel & Tourism Office, and spent $34.6 billion while here.
In terms of regional relevance in the U.S., The Pew Research Center reports that, aside from Hawaii where U.S. Asians accounted for 56% of the population in 2015, Asians make up the largest share of the overall state populations in California (16%), New Jersey (10%), Nevada (10%) and Washington (10%).
If you do business with vendors and partners in China, Korea, Vietnam, Laos, Singapore and other Asian countries, this can be a great opportunity to connect with them, too. Plus you’ll want to be aware of the dates in terms of expected time off for holiday celebrations. As an official public holiday, Chinese people can get seven days of absence from work during the festival.
how and why have businesses started to participate in this holiday?
While participating in Lunar New Year may be new to many U.S. marketers, there are some that have been doing it successfully for decades.
For nearly 60 years Wells Fargo has created red envelopes for customers.
Since 1961, Wells Fargo customers preparing to give Lunar New Year gifts of “lucky money” have been able to pick up festive envelopes at select local branches in areas with large numbers of Chinese customers.
It is a Chinese tradition for families and friends to exchange “lucky money” on special occasions, like weddings, and during the Lunar New Year. Crisp bills are gifted in bright red envelopes, considered the luckiest of colors. Gold decorations are typically printed on the envelopes with the Chinese characters for great luck and great adventure. Sometimes sketches of the peach and the pine tree are used to represent longevity, while the carp may also be chosen to represent success. In addition to the monetary gift inside, the tradition of giving a special envelope is a way to share joy and build relationships.
Panda Express shares the culture behind their popular Chinese dishes.
“The reality about Panda is that we were many people’s first Chinese experience in the U.S.,” said Andrea Cherng, Panda Restaurant Group’s chief marketing officer and daughter of Chinese American co-founders Andrew and Peggy Cherng. “What a fantastic opportunity for us to be able to bridge cultures and bring to them our interpretation of what’s so special about this holiday.”
Luxury brands create one-of-a-kind products with Lunar New Year themes each year.
From a product perspective, luxury brands are often the most involved in the holiday. According to a report by Bain & Company, China represents 32% of the global luxury consumption. In 2019, Gucci and Louis Vuitton brands released entire collections themed with Lunar New Year and the year’s zodiac animal, the Pig.
When are the themes of Lunar New Year?
Each Lunar New Year is themed by one of the five elements and a Chinese zodiac animal. The twelve Chinese zodiac animals are, in order: Rat, Ox, Tiger, Rabbit, Dragon, Snake, Horse, Goat, Monkey, Rooster, Dog, Pig.

Rat is the first in the twelve-year cycle of Chinese zodiac signs, and for this reason, this time period is considered a year of new beginnings and renewals. People born in the year of rat are believed to be born with the zodiac rat characteristics—in this case very industrious and thrifty, diligent and positive. A rat symbolizes abundance, success, adaptability, kindness, fertility, creativity, foresight, intelligence, expanse, strength, conservativeness, stealth and the ability to solve problems.
Given that Chinese New Year happens every year, businesses can plan ahead and think about serializing programs so that they don’t reinvent the wheel each time. Here’s a look ahead at the next three years:

You can find out more about Chinese New Year and zodiac elements here.
What are some relevant ways your business can consider participating in Lunar New Year?
As a way to connect with Chinese American consumers, Lunar New Year is a great time to express appreciation for their business and send a wish to them and their family for prosperity in the new year. Consider sending Lunar New Year greeting cards to your Chinese American customers or clients. Hallmark recently debuted Eight Bamboo, a line of cards specifically created to celebrate relationships and life moments within Chinese American culture.
“Honoring heritage and blending it with inspirations of modern culture, Eight Bamboo will help Chinese consumers meaningfully connect with their loved ones during key holidays such as Lunar New Year,” says Hallmark creative product development director Priscila Avilés Jamison. “The cards feature beautiful premium designs that showcase an elevated level of craftsmanship.”
If your business chooses to send Lunar New Year greeting cards to customers, here are a fews appropriate messages to convey your wish:
There’s no better way to begin the new year than by letting you know how much you’re appreciated. Wishing you a happy and auspicious year.
I hope you know how much I value your business. As the new year begins, I wish you good health and good fortune, and I look forward to helping you make progress toward your goals.
Wishing you health, happiness and prosperity in the new year. I always enjoy meeting with you, and I hope we’ll get to talk again soon!
Enclose a few complimentary red envelopes that your customers can use to give their family members “lucky money” and wishes for good fortune. Don’t use the envelopes to carry offers of money or credits to your customers. That exchange is reserved for close family.
If your business has a retail presence in U.S. cities popular with Chinese Americans and Chinese tourists, consider displaying posters celebrating Lunar New Year and feature snacks like almond cookies, lychee or ginger candies and moon cakes.
Another idea to share the holiday with business partners across the globe is by trying some of the traditional Chinese food and customs with your U.S. staff for cultural enrichment.
it's inclusive to celebrate what's unique about cultures.
Businesses that identify values we share across cultures and find unique ways to celebrate them within the season, like Lunar New Year, are making deeper emotional connections with their customers.
If you identify a clear role for your business to participate in the Lunar New Year festival, bring it to life bearing in mind the deep cultural identity that the festival embodies—family bonding, respect and the pursuit of prosperity. 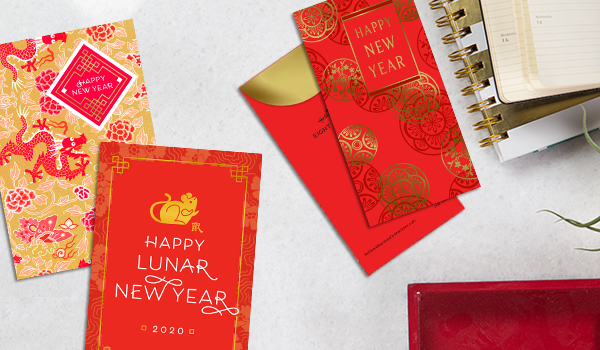